O Allah, send a perfect prayer and complete greeting of peace upon our master Muhammad — the one by whom problems are solved, and anxieties are relieved, and needs are fulfilled, and aspirations are attained and good endings are received, and by whose noble face the clouds give rain — and upon his Family and Companions, with every glance and every breath, by the number of everything that is known to You. 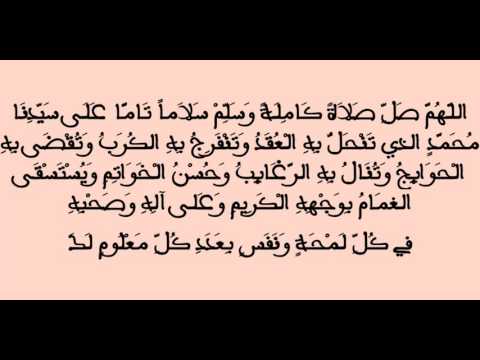 One who regularly recites this prayer every day, 141 times or more, Allah will relieve him of his grief and sorrow, and will remove his problems and difficulties, ease his affairs, illuminate his inward, elevate his status, improve his state, increase his sustenance, and many more doors of virtue will be opened for him. His words will become more effective as a leader, he will be protected from unfortunate events, and bad calamities such as starvation and poverty, and love for him will be placed in the hearts of other people—and there is nothing he asks of Allah except that Allah will give it to him.

Imam al-Qurtubi goes on to say:

These benefits will not be received unless the prayer is read regularly. This prayer is among the treasures of Allah and its recitation is a key these treasure troves. Those servants of Allah who regularly recite this invocation will be granted an opening and through it, they will attain what is willed for them.

Whosoever is persistent in reciting the invocation 11 times each day, then it is as if it [the prayer] sends down provision from the heavens and causes it to sprout from the earth.

Imam al-Dinawuri is also noted in Khazinat al-Asrar to have said:

Whosoever reads this salutation 11 times after each [obligatory] prayer and adopts it as his regular litany will never have his provision cut off, and he will attain lofty degrees and a sanctuary of wealth.

Whosoever reads it regularly each day 313 times — the number of the Emissaries, upon whom be peace — for the unveiling of secrets, then he will behold everything that he wanted to see.

Whosoever reads it regularly 1000 times daily will receive what cannot be described by those gifted at description — what no eye has ever seen, what no ear has ever heard, and what has never occurred to the heart of man.

Elsewhere in the book, it is described how the prayer is traditionally used in North Africa to obtain a want or to avert a calamity:

And among the tried and tested prayers is the Prayer of Relief (al-Salat al-Tafrijiyya) from al-Qurtubi. Those in the Maghreb call it the Fiery Prayer (al-Salat al-Nariyya), and that is because when they wish to obtain something that is sought after or avert something undesirable, they come together in a single gathering and read this prayer 4,444 times and quickly obtain what they were seeking. The people of mystical secrets call it the Key to the Encompassing Treasure for Obtaining the Servants’ Wants (Miftah al-Kanz al-Muhit li Nayl Murad al ‘Abid).

Note: If the prayer is recited in this way, the figure of 4,444 should be divided among a group of 7 or 11 regular reciters of this invocation. For example, if there are 11 people in the group, the participants would recite the prayer in unison with each person contributing to the total with 404 salutations. At the end of the gathering, a supplication should be made to Allah asking Him to fulfil the need for which the prayer was carried out.

Shaykh Muhammad al-Nazili, who spent the majority of his life as a scholar living in Mecca, also describes how he received Ijaza (permission) to recite the prayer:

Salat al-Nariya is also referred to as Salat al-Taziyya due to its association with the great Shaykh and gnostic Abd al-Wahhab al-Tazi (d. 1206 AH/1792 CE), a native of Fez, Morocco. Shaykh Abdul Wahhab al-Tazi was the student of the erudite Shaykh Abd al-Aziz al-Dabbagh (d. 1132 AH/1719 CE) and later became the teacher of the Shaykh Ahmad ibn Idris al-Fasi (d. 1253/1837).