Ratib al-Attas (Arabic: راتب العطاس) is a composition of litanies and supplications, the blessings of which are like an endless ocean. It was composed by the great saint and Qutb Habib Umar ibn Abdur Rahman al-Attas X (992-1072AH).  Many virtues and benefits are associated with this litany including the removal of afflictions and difficulties, fulfilment of needs, protection of one’s family, forgiveness of sins and the lengthening of one’s life. It should be recited every day, or once in the morning and once in the evening if read for a particular intention. The Ratib al-Attas is said to be the only piece of literature attributed to Habib Umar during his lifetime. 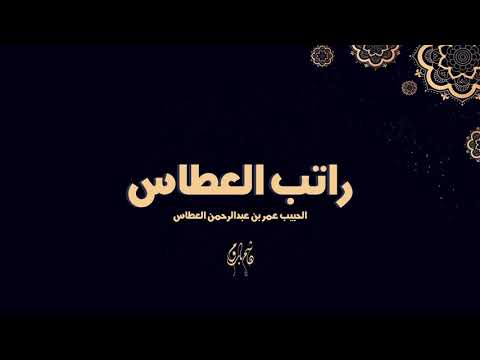 Habib Umar al-Attas was born in 1583 CE/992 AH in the village al-Lisk. He was raised by his father Abd ar-Rahman, who was also a saintly man. The family name al-Attas, meaning ‘to sneeze’ comes from a miracle associated with Habib Umar’s grandfather, Aqil bin Salim. It is said that while he was in his mother’s womb, she would hear him sneeze and praise Allah thereafter. This miracle continued through the generations and Habib Umar is also said to have behaved in this miraculous way in the womb.

Habib was a man of great spiritual stature, although his commitment to remaining hidden and aversion to fame veiled his reality from the people. Few were able to comprehend the magnitude of his rank during his lifetime. Only the saints, blessed with spiritual unveiling, would recognise and pronounce his grandeur. One of them was his Shaykh, Husain bin Abu Bakr bin Salim, who would proclaim his greatness when he was disregarded by the people due to his simple dress and blindness. He said, “Were you to see what is in this Sayyid’s possession, you would lower your banners before him, bow your heads and both your spirits and bodies would yearn for him.” His most devoted student, Shaykh Ali Ba Ras expressed his concern to his teacher that not many people had truly benefitted from him. Habib Umar al-Attas replied, “If they had looked at me in the way that you look at me, I would have taken them to Allah in an instant.” He would also say, “No one will come to us, except for those whom we will.”

Imam Abdallah bin Alawi al-Haddad, who was from among his students, was asked “Are there any authored works or poetry attributed to Habib Umar?”. He replied, “I, Shaykh Ali Ba Ras and Shaykh Muhammad Ba Mashmus are from his works!” He also said, “When I visited Habib Umar bin Abd ar-Rahman al-Attas, I saw that he embodied everything of his predecessors all the way to the Messenger of Allah ﷺ. He described him further saying, “This Sayyid is a testament to uprightness and the true rank of slavehood (ubudiyya). He is the greatest in concealing secrets, subduing the ego, in humility, preferring obscurity and turning away from the people, but no one knows him because most of his perfections are hidden, and no one will be drawn towards him except for those of understanding and spiritual insight.”

On occasion, Habib Umar al-Attas himself would unintentionally reveal his rank, when overcome by spiritual states. One such example was when he was asked by his student: “Is it possible for one to reach the rank of Shaykh Abd ul-Qadir Jilani?” Habib Umar replied, “I am like him, and like him, and like him,” repeating it twenty times. He would only make such remarks when overcome with spiritual enrapture. In reality, he was upon the path of extreme humility, relying only on the mercy and favour of Allah. He did not consider himself to be a man of rank, spirituality, knowledge or action. Imam al-Haddad described him as “a sign of Allah in humility”.

The people of rank remarked that his state was unlike other saints. Despite his exalted station, he had the utmost compassion, kindness and modesty. In congregational prayer, he did not designate a specific place for himself and would sit in any vacant space available to him. He wouldn’t allow others to move from their places for him. He generously gave to the poor and to widows and was affectionate to all, especially to children.

The Ratib al-Attas is a litany filled with lights and secrets, containing both worldly and spiritual benefits. Imam Ali bin Hasan al-Attas has mentioned in the commentary of the Ratib al-Attas, the Qirtas, ‘This Ratib is a gift to the people, bestowed by Allah through this great Imam.’

The one who recites Ratib al-Attas will experience protection, increase in sustenance, protection, a long life as well as the reward for remembering Allah. The reciter will receive according to the nobility of his intention.  The recommended time for its recitation is after the Isha prayer, and before Isha in the month of Ramadan. In times of distress or for the fulfilment of needs, it should be recited in the morning and the evening, as the prayers found in Ratib al-Attas are sourced from supplications in the Quran and the Sunnah, which are recommended to be read during the day and in the evening.

Habib Umar al-Attas related many benefits of reciting the Ratib. He said, ‘People approached him complaining of insufficient sustenance. He advised them to recite this Ratib, completing it with the recitation of la ilaha illa Allah at the end of the Ratib.’ They acted upon his advice, and Allah relieved them of their distress.

It was also related on the authority of Shaykh Ali bin Abdallah Ba Ras that one who recites this Ratib regularly, it is hoped that their sins will be forgiven. He also said, ‘When this Ratib is recited in a place, it is a means of protection from tribulation and it is a protection and fortification for them equivalent to having the protection of seventy knights. There is no doubt or dispute in this.’

Habib Ali bin Hasan al-Attas said, “Whenever I am in fear and I recite it, I do not experience anything bad. Some of the close companions have also mentioned that they recited it when they were in fear of being attacked by a gang of thieves who were going to steal their things, but they were unable to, and there was fifteen of them.’

Sayyid Alawi bin Alawi bin Abdallah Ba Alawi related that towards the end of his life, as he felt the burden of death approaching, he visited Tarim during the lifetime of Imam Abdallah bin Alawi al-Haddad. Imam al-Haddad said, ‘O Sayyid Alawi, death seems imminent.’ He replied, ‘O Sayyid Abdallah, pray that my death is delayed. I would like to reach my town Amad and see my children and family.’ Habib Abdallah said to him, ‘Repeat the saying of our Master Umar in his Ratib, ‘Ya Latifan lam yazal ukufbina fi ma nazal innaka latifun lam tazal ukufbina wa’l-Muslimin. Keep reading this until you reach your hometown Amad.’ After reaching his hometown, he lived two months longer, until he passed away.

It has been related that there was a desert tribe known by the name Al-Masud which were extremely affectionate towards Habib Umar al-Attas. They would recite Ratib al-Attas regularly wherever they went to the extent that even their women and children were regular in its recitation and had memorised the litany. It is related that one day, an enemy tribe with a large army were preparing to attack them. During the night, the enemy tribe sent some spies to locate them. As they approached, they heard them reciting the following line from Ratib al-Attas: ‘Bismillahi amanna billahi wa man yu’min billahi la khawfun alayhi – In the name of Allah, we believe in Allah and the one who believes in Allah has nothing to fear. ‘ On hearing this, one of the spies felt sympathy towards them and returned back to his tribes-people, ordering them not to attack under any circumstance.

2. In the Name of Allah, The Compassionate, The Merciful
All Praise is due to Allah, the Lord of the worlds. The Most Beneficent, the Most Merciful. The Owner of the Day of Recompense. You Alone we worship, and You Alone we ask for help. Guide us to the straight way. The way of those on whom You have bestowed Your Grace, not of those who earned Your anger nor of those who went astray.
[1:1-7]

15. Transcendent is Allah, all Praise belongs to Allah,
there is no God but Allah, Allah is the Greatest. (Four times)

18. There is no God but Allah (Forty times)
Muhammad is the Messenger of Allah, may blessings and peace be upon him. (Once)