Salat al-Azeemiyya (Arabic: الصلاة العظيمية), the Prayer of Tremendousness, also known as Salat al-Idrisiyya, is a prayer that was transmitted by the famous saint Shaykh Ahmad ibn Idris al-Fasi (d. 1252 AH / 1837 CE). Shaykh Ahmad ibn Idris was the founder of the of the Idrisi order, a branch of the Shadhili path. He received the prayer on two occasions: once directly from the Prophet ﷺ without an intermediary and another time through al-Khidr.

O Allah, verily I ask You by the Light of Allah’s tremendous Countenance, who filled the pillars of Allah’s tremendous Throne, and by whom Allah’s worlds were established—that You send prayers upon our liege lord Muhammad the possessor of tremendous rank, and upon the Family of the tremendous Prophet of Allah, as great in magnitude as Allah’s tremendous Essence; with every glance and breath, and as many times as the number of what is contained within the knowledge of Allah, the Tremendous; with a prayer that is perpetual by the perpetuity of Allah, the Tremendous. [This I ask] out of reverence for your right, O liege lord, O Muhammad, O Possessor of Tremendous Character. And send peace upon him and his Family with the like thereof. Join us together just as You have joined the soul (nuh) with the self (nafs)—outwardly and inwardly, in wakefulness and in sleep, and make him, O Lord, a soul for my essence in every aspect, in the lower world before the Hereafter, O Tremendous.

Shaykh Ahmad ibn Idris travelled the spiritual path through several teachers from the Shadhili, Naqshbandi and Khadiri orders. After receiving from his teachers, he was honoured with the wakeful vision of the Prophet ﷺ. After this, he was given his own litanies and initiated his own unique spiritual path. He was given three litanies: a formula for remembrance (the Idrisi Tahlil), one for salawat (Salat al-Azeemiyya) and the other to seek forgiveness (Istighfar al-Kabir).

I met with the Prophet ﷺ in a wakeful state and Khidr was in his company. The Prophet ﷺ ordered Khidr to invest me with the litanies of the Shadhili order, and so he gave them to me in the Prophet’s presence. The Prophet then said to al-Khidr, ‘O Khidr, give him what unites all of the remembrances, invocations, and prayers for forgiveness, and what is superior in reward and greater in number.’ Khidr replied, ‘What is that, O Messenger of Allah?’ The Prophet ﷺ said, ‘Say:

There is no god but Allah, Muhammad is the Messenger of Allah—with every glance and every breath, by the number of what is encompassed in Allah’s knowledge.

And so he [Khidr] said it [the Idrisi Tahlil], and I said it after him and the Prophet ﷺ repeated it three times. Then he said, ‘[the Prayer of Tremendousness].’ Then he said, ‘Say:

I seek the forgiveness of Allah the Tremendous, He besides whom there is no god—the Living, the Self-subsistent, the Forgiver of sins, the Possessor of Majesty and Honour—and I turn to Him in repentance from all acts of disobedience, all sins and misdeeds, and from every sin I have committed intentionally and unintentionally, outwardly and inwardly, in statement and in action, in my every movement and stillness, in my passing thoughts and my breaths—by the number of what is encompassed in [divine] knowledge and enumerated in the Book and inscribed by the Pen, and by the number of what was brought into being by divine omnipotence and determined by divine will, by the ink of Allah’s words, as befits the majesty of our Lord’s Countenance, beauty, and perfection as our Lord loves and is pleased.

This is: the Great Invocation for Seeking Forgiveness [Istighfar al-Kabir] said by Khidr (peace be upon him and our Prophet ﷺ). I repeated it after both of them, and lo I was clothed in light and invested with Muhammadan Strength (Quwwa Muhammadiyya) and provided divine sights. Then the Prophet ﷺ said to me, ‘O Ahmad I have given you the keys to the heavens and the earth [i.e., the aforementioned invocations].’ Then the Messenger of Allah ﷺ invested me with these prayers without an intermediary, and so I began to give them to the spiritual aspirants (muridin) just as the Prophet ﷺ gave [them] to me. 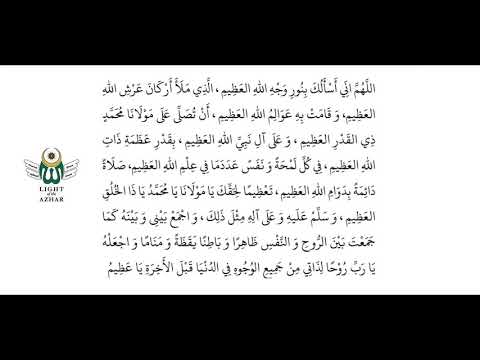 Salat al-Azeemiyya, as well as the Idrisi Tahlil and Istighfar al-Kabir are part of the general adkhar recited daily by adherents of the Jafari Order, a path initiated by Shaykh Salih al-Jafari (d. 1399 AH/1979 CE). The Shaykh himself followed the spiritual teachings of Shaykh Ahmad ibn Idris, taking the Idrisi litanies and teachings from Shaykh Muhammad al-Sharif, the grandson of Shaykh Ahmad ibn Idris.

In a dream, Shaykh Salih al-Jafari was instructed by the Prophet ﷺ to give permission to his followers to recite the litanies. The Shaykh said:

I was travelling by sea on the boat from Jeddah to Libya, and I saw in my sleep that I was sitting in the room that I was in, on a bed, and next to me was another bed. I was sitting and reciting the First Salawat (of the Salawat of Shaykh Ahmad ibn Idris). So when I began reciting it, the Prophet ﷺ entered the room and sat on the other bed and he said, ﷺ: ‘I came to hear from you the Salawat of Ibn Idris.’

Then he laid down on his right side ﷺ and the more I continued in reciting it, the more his light increased, and so did his visibility to me ﷺ. So I thought to myself, whilst in the middle of the recitation, to get up and greet him ﷺ, so I stood up and kissed his noble hand and he wiped with it my face and my chest. Then he pointed to me with his hand to sit and finish the prayer. So I sat back and finished the First Salat, and said after it: ‘Oh you of perfect body, of you of beautiful attributes,’ until the end of the Seventh Salat. Then I woke up from my sleep, rejoicing, happy, thanking Allah Most High.

And he ﷺ, had already given me a general ijaza for all the Salawat. And that is that I saw in my dream that I was doing Salawat on the Prophet ﷺ, with Salawat other than the ones from our Idrisi tariqa. But when I began with the Azeemiyya (of shaykh Ahmad ibn Idris), he appeared to me, ﷺ, sitting on a chair. So I got up and kissed his noble hand and said:

‘Shall I do Salawat on you, oh Messenger, with this formula?’

So he said: ‘With it and with other than it.’ And he pointed with his noble head from top to bottom, and from bottom to up, ﷺ.

And I have great hope that everyone who hears these words of mine, and turns with his heart and body toward these Salawat, and recites them regularly with love and belief, that he will see him ﷺ in sleep and in the waking. And nothing stands between me and the doubters except trying. So oh you who is fond of himself, proud of his every action, heedless of the enclosures of sanctity, turning away from the causes of his uns, hurry to us! And then hurry to us! For in every age we have appearances… and pearls, and jewels!

So there you go, oh happy reader. You now have an ijaza in the great Salat al-Azeemiyya, and the rest of the Salawat of shaykh Ahmad ibn Idris, and all other Salawat formulas in the world. And your sanad is this: From the great Qutb, sayyidi Shaykh Saleh al-Ja’fari, from the Messenger of Allah ﷺ.

The Shaykh went on to say:

You must act upon this advice which is more precious than gold and silver, and will make you race ahead of the horse riders in the race track, and that will, by the permission of Allah Most High, take you to what you desire, to what no eye has seen nor ear heard, nor has occurred to the heart of man. It is:

If you wanted to read the Azeemiyya or any of the other Ahmadiyya salawat, you must have wudu and sit facing the Qibla, sitting on your knees, looking down, directing your heart and soul to the Prophet ﷺ, imagining his Muhammadan image in your heart, looking at him the looking of real witnessing. And by that the veils between you and the one being witnessed ﷺ will be removed, and he will look at you as you look at him, and love you as you love him, and he will give you from his sublime glances and his luminous soul, and so your soul will shake like the green twig shakes when it is given water.

This is especially if it is in an empty place after the Fajr Salah or in the depth of the night. So if anything appears to you, do not tell anyone of it except your Shaykh, the one from whom you took the path, and if you do not see anything then be patient until you become fully consummate and you deserve it.

He said Most High: ‘And when he reached full maturity and became consummate in form, We gave him wisdom and knowledge.’ (28:14)

Shaykh Ibrahim ar-Rashid, one of the main students and successors of Shaykh Ahmad ibn Idris wrote in a letter:

And it is greater and more than that, but this is to make it easier for us to understand. Understand the secret of his saying: ‘in every glance and every breath, as many times as all the things contained in the knowledge of Allah, the Great.’

Shaykh Ibrahim ar-Rashid also wrote a treatise on the life and great rank of his shaykh, Shaykh Ahmad ibn Idris. In it he wrote:

And among his miracles, may Allah be pleased with him, is that one of his murids died in Mecca, may Allah Most High honour it, and was buried in the Mualla. And there was a man from the brothers, from the people of kashf, of illuminated baseera (spiritual vision), standing there during the burial.

He saw our master Azrael S, who came with bedding from Paradise and great lamps, and expanded the grave as far as the eye can see, and prepared the bed for the deceased man and placed the lamps for him therein.

The man who saw this said to himself: ‘I wish if I died Allah would honour me with such an honouring (karama).’

So our master Azrael S turned to him and said: ‘Each and every one of you will have like this honour, by the blessing of the Salat al-Azeemiyya.’

One day, a Ba-Alawi shaykh who was traveling with some companions passed another caravan. He insisted on stopping the other caravan and on opening the saddle bag of a slightly surprised old man. Inside he found some clothes and a piece of paper, on which was written Salat al-Azeemiyya. ‘Ah,’ he said, ‘I wondered where that strong light was coming from.’